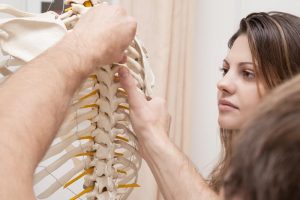 The Orthospinology chiropractic technique, is a specialty within atlas-xray-200-300the field of chiropractic that focuses of the upper cervical region. Even more specifically, practitioners of the Orthospinology (previously Grostic technique, though often still spoken of by this name) concentrate on the Atlas vertebrae – the very first bone in the neck. Their goal is to make the Atlas bone orthogonal (or exactly perpendicular) to the skull and the Axis (the second bone from the top of the spine).

And, it’s not hard to imagine how the atlas may be out of alignment. The rather light atlas (it weighs about 2 ounces) supports the weight of the human head (which weighs about 9 to 17 pounds). Imagine the head as a golf ball and the atlas as the top of a golf tee. The small tee is best able to support the weight of the golf ball on top when it is straight up and down. The atlas can become misaligned as a result of chronic poor standing or sitting posture, an awkward sleeping position or improper lifting. These are all examples of gradual processes. The atlas can also be jarred out of alignment by an auto accident, bad fall, or a blow to the head.

When the atlas is out-of-alignment (non-orthogonal), the body will compensate in other ways to keep the heavy head centered over your feet. The other spinal vertebrae and the muscles in your neck, torso and lower back will alter their normal position and function in response (just like the marching band reacting to the position of the first member). Now you’ve created a situation where there may be excessive pressure on certain nerves, muscle spasms and tissue inflammation which can cause pain and dysfunction in other areas of the body. Research shows an atlas subluxation puts torque on the brain stem and will also adversely alter cerebrospinal fluid flow around the nervous system.

Font Resize
Contrast
Accessibility by WAH
Call Us Text Us